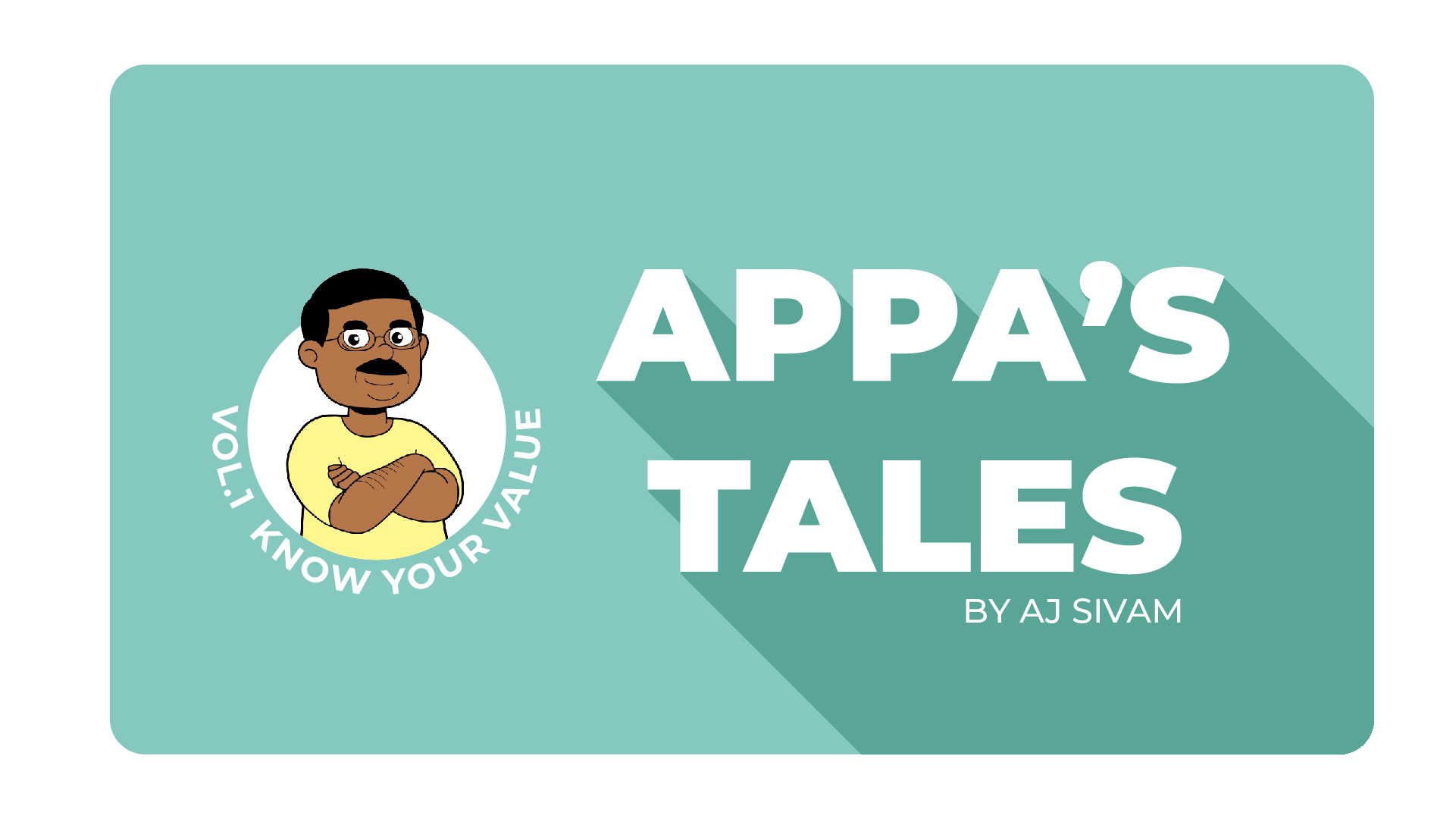 My dad, or as I call him in Tamil, “appa,” is the type to always have a story at the ready. Whenever I’ve been unsure about a tough decision, personally or professionally, he’s helped me out by recounting a relevant story from his life that seems, at first, irrelevant to my situation. But, quickly crystallizes into a profound parable that clarifies my path forward. Recently, I’ve decided to start documenting his stories in the hopes that I can share his wisdom with the world. With any luck, you’ll find them as helpful as I have. Welcome to appa’s tales #AppasTales.

Years ago, appa worked at a hotel with a colleague who’d recently immigrated to the country. Like many new immigrants, he was driven by ambition. He began seeking a promotion to work the front desk, and despite being overqualified, he worked himself to the bone—coming in early, staying late, and going above and beyond his job description—to demonstrate to management he was the right person for the job. Eventually, they had no choice but to reward his hard work. They gave him the job.

Sadly, what should have been a happy ending to the story quickly took an unfortunate turn. His colleague continued to work tirelessly, but management stopped valuing his hard work because they’d grown to expect this as the norm and took him for granted. He hit a wall, not on account of his effort or ability, but on account of the impression he’d created. It wasn’t until he quit in frustration that management understood what a huge hole he’d left behind. Desperate to fill it, they were forced to hire someone off the street with fewer qualifications and a smaller work ethic and pay him more. It was a huge loss.

At the time when Appa told me this story, I’d been running myself ragged, working 12 hour days with no end in sight. I’d been hired to perform one job, but, naturally, I was working four or five, skipping across different creative projects and filling every visible gap, so management would never notice the cracks that lay beneath. I was at a crossroads. I wanted to move on to another opportunity, but I’d already put in so much hard work and I didn’t want it to go to waste.

The moral of Appa’s story wasn’t that I should avoid working my hardest, or keep my employers’ expectations in check. It was that I should understand my value and make sure my employers understood it too. He was explaining that I, like his colleague at the hotel, had begun to let my employers take it for granted. Suddenly, I knew what to do. I moved on without looking back, and from that point onwards, I made it a point to track precisely how much of an impact I was making so I would never make this same mistake twice.

For professionals today, this is a familiar problem. There are very few jobs where the distinctions between roles are not blurred. Creatives are marketers; marketers are creatives; engineers are programmers; programmers are managers — the list goes on and on. Add to this the fact that online connectivity has made the 9 to 5 schedule a relic of the past, and it’s easy to see why it’s more important than ever to take regular stock of your contributions and be communicative about your findings. If all goes to plan, there should never be any disconnect between how much you’re getting out of your job and how much you’re putting in.

Don’t let your great idea die in a Google Docs graveyard. Let’s talk about how you can bring it to life.

Your brand deserves to be positioned in a way that’s reflective of its value. Getting it there is what I do.


Stay up to date

Insights delivered to your inbox! Subscribe to my newsletter to stay up to date on my blog and other ongoing work